While Spotify dukes it out with Apple and other big tech names to target high-end users in mostly developed markets, a startup out of China has raised some money to expand its music streaming business in the massive but still nascent market of Africa.

Boomplay, a service founded by Transsnet — a joint venture between Chinese phone maker Transsion and Chinese consumer apps giant NetEase — has raised $20 million in outside funding as it looks to break into more sub-Saharan countries and continue to build up its database of music tracks.

The company currently has some 5 million music tracks and videos on its platform — with a huge emphasis on African artists — with 42 million monthly active users, some 85 percent of which are on the African continent (primarily Nigeria, Ghana, Kenya and Tanzania). It is adding on average about 2 million users each month, a mix of paid and free subscribers, the latter seeing ads when they use the service.

Relatively speaking, this is just a small dent in the African market, which has around 1.2 billion inhabitants.

The funding is coming from Chinese investors Maison Capital and Seas Capital, with other undisclosed investors. Boomplay is not disclosing its valuation, but Phil Choi, the head of international partnerships at Boomplay, confirmed that it was up on its previous round and that the company has raised $25.5 million to date — modest numbers, considering the hundreds of millions that have been poured into Spotify, Deezer and many other streaming services, but a size that fits what is still a very nascent target market.

“The board feels it’s better to be a stable company and work at a slower pace rather than taking on more funding and going too fast,” Choi added.

The Apple Music of Africa?

Some have described Boomplay as the Spotify of Africa (the same description one of its local competitors, Spinlet, also gets), but I think it sounds more like the Apple Music of Africa.

The company got its start in 2015 when Transsion — the biggest supplier of phones to the African market, with about a 40 percent share at the moment, a mix of feature and smartphones, says Choi — decided to build mobile data services that it could sell to consumers to make its mobile phones more attractive, and to potentially make a little extra service margin on top of hardware sales.

It turned to NetEase — one of the big Chinese mobile content developers that publishes games, has its own music service and more (it even has its own TikTok clone, Vskit, pronounced “V-skit”) — in 2017 to help develop it and other content services, which were tightly integrated into the phone’s platform. In 2017 they formed a JV to run it called Transsnet. Boomplay — which also offers video and entertainment news (another Apple parallel) — is now a partially owned subsidiary of Transsnet; it does not disclose the size of its stake. 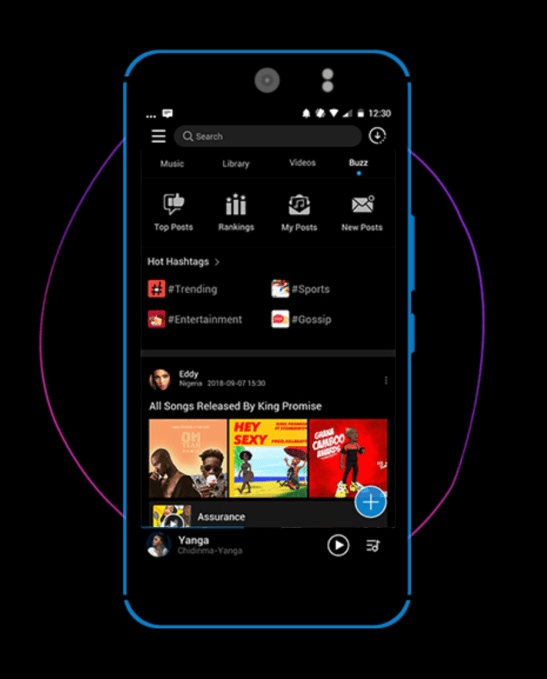 The service still benefits from Transsion’s large market share, but it has also published mobile apps for Android and iOS that tap users on a wider range of smartphones.

And it’s also tapping an international growth opportunity, specifically by marketing itself to Africans that have emigrated to other parts of the world and continue to listen to music from the continent.

“Music has no borders, and we’re committed to providing a rich and high-quality music experience for all users — not just in Africa, but around the world,” said Boomplay CEO Joe He. “This investment will help us do just that, by fostering cultural interchange and helping people communicate through the universal language of music.”

Boomplay’s rise in Africa, meanwhile, comes at a time when streaming services that dominate in other parts of the world, such as Spotify and Apple Music, have yet to really break into the African continent. Spotify launched its first service in Africa in the continent’s most developed market — South Africa — in March 2018, and has yet to expand to more countries, while Apple — with its premium pricing — has by Choi’s estimate sold less than 1 million iPhones in the region, which limits its potential growth.

Boomplay’s growth has — predictably — mirrored that of the handsets where it is preinstalled, but notably covers a number of countries in the sub-Saharan region, as well as a strong range of local music alongside more international tracks, by way of deals with large labels like Universal Music and Warner Music.

The role that China has played in developing tech in Africa has been an interesting one. It started years ago when Chinese companies like ZTE — looking for growth outside their home market — were winning big deals to build telecoms infrastructure at a time when tele-density on the continent was the lowest in the world. Rather than building fixed-line infrastructure, they built mobile infrastructure, and that eventually led to a wave of Chinese OEMs, making cheap feature and smartphones, becoming some of the biggest handset suppliers. “The Chinese government has really pushed investing in Africa since they see a lot of potential there,” Choi said.

Despite the very homegrown nature of the arts in Africa — specifically in areas like music and cinema — the development of services like Boomplay to deliver that content has been a natural progression in China’s wider tech growth in the region.

But if you follow the African market, you know that despite the big potential — of the 1.2 billion inhabitants, the average age is 21, Choi said, a great market for streaming music services — the economy is still underdeveloped, which hinders significant growth.

In the case of Boomplay, that translates not just to adding more users in countries that rank as some of the poorest in the world, but in getting them efficient ways to pay if they do want to do so.

“We’ve seen healthy growth, but one of the problems is that there isn’t really a sustainable or efficient mobile payment system,” Choi noted. Processing payments, he said, “takes really long and can be unreliable, for example, halfway through a transaction, errors may occur.” He said the company already accepts Mpesa, one of the key mobile payment services that was originally founded in Kenya, along with other payment methods, but the plan is to add more to that soon.

Longer term, Choi said that will likely lead to more funding being raised. Whether that comes from China again or elsewhere will be interesting to watch. “Chinese investors see Africa as the China of 10 years ago,” he said, “so they feel they can apply the same models to it, and bring it up to being a very prosperous region.”

“Africa is full of opportunity, from its young demographics to its vibrant culture, and Boomplay sits in the middle of all of that greatness,” said Tony Li, managing director of Maison Capital, in a statement. “Boomplay has incorporated NetEase’s experience in the music streaming business with Transsion’s expertise in local operations, and in doing so Boomplay became the dominant player in the region in a very short period of time. As more of Africa comes online, we are confident that Boomplay will continue to be a major force in business and culture.”